from the flash novella by Matt Potter, published in February 2018 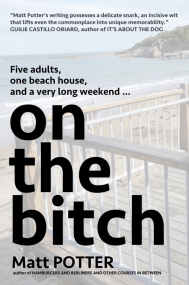 to purchase On the Bitch in paperback, click here

“Ah, I’m not fussy,” she says, wiping her hand across her stomach, leaving a dusty red smear on her t-shirt. from Kids

“But you know what would be really crazy?” she says. “And I have been living in Australia since two years so I know what people think is crazy.” from What you see is what you get

Passing trees on the flat north German plain played shadows through the window on Magda’s sleeping face and I thought, no, I do not want to grow old in this country. from Ein Ausflügler in Schwerin

“That is what I tell the people at my behaviour workshops. You must feel your mistakes before you can make them better.” from Shiraz

“Could you do me a combo?” she asks, her eyes flicking at the waitress’s breasts. from Coffee

“But he’s not dead yet, and someone’s got to spend some of that money he got when he sold his hardware empire.” from Favour

“I know, but look at it,” and Valerie thrusts the meat at Kendalynn’s face. “It’s beef.” from Dream

“No ambition, my daughters,” Otto says. “No interest in business. No sense of competition. No drive. Nothing!” from Pile

She unwinds the scarf from her neck, one end draping on the floor. “Unfortunately, it is ridiculous.” from Scarf

And I sit in the loveseat, my open palms soft on the red velvet, and remember the vase had a chip in it anyway. from Ming

“She said she wouldn’t go out with my ex- but I don’t trust her. She’s got a lot of catch-up fucking to do.” from Broken

“If anyone wants me,” Valerie says over her shoulder, as she heads towards the large Garden Centre sign with the arrow pointing outside, “I’ll be out on the terrace.” from Hardware

The engine revs under Otto’s foot and I smell that most rarified of things, BMW exhaust. from Destination

“You’ll have to give it back,” I said, voice flat, the wowser in the corner. from Penguin

“My mother’s sick and nearly ninety and when she goes I’ll have to sort a lot of things out. And there’s only me to do it.” from Am Gendarmenmarkt

Of course not only is my German shit but Valerie’s right, I’m talking shit in English too. from Schmutzig

He nods his head. Perhaps, in wonder. Or at the stupidity of those who could have built it into something, but haven’t. from Popular

I’m left to contemplate the ceiling and the morning and the rest of my life. from Communication is the key

… he could be any number of my ex-students. Some weeks I wonder if I haven’t taught English as a Second Language to half the sub-continent. from Indian

“You like a lot of space when you’re ironing then?” “Not always. Small rooms are good too.” from Smoking Gun

She must be tired: normally she would take them off before lying down, so they’re easier to iron in the morning. from Lights Out

“You have a lot of dolls, Kendalynn.” “Otto hates them, so I have to keep them in here.” from The eyes have it

Which is not bad for a man of fifty-six. Give or take some Viagra. from Samoa

“Never trust a hungry nun,” Magda says, as our eyes focus in the dark. from The Apple of a Nun’s Eye

… he’s cooking on the eight-burner stove, head bobbing down under my line of sight, hidden by the island cupboard. Like everything in this house, the kitchen and eating area are spacious and overdone. from Sugar-whacked

A streetlight beamed through the window. My penis cast a pendulous shadow across my thigh. from Schokolade

“Now she’s got some money from her aunt who died six months ago and she says she wants a nose job for her birthday. Will it make you breathe better? I said.” from Deluge

“It is not my house, Hugh. I have an apartment in Berlin.” from Zapped! again

“By the time she passed away the family situation was so fucked up, no one could agree on what to put on the plaque,” he smiles. from With a sea view